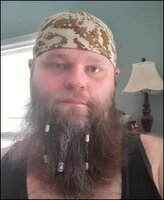 Aaron Blake Houp, 35, died Tuesday, September 14, 2021, at Grady Memorial Hospital in Atlanta, GA. Born September 22, 1985, in Harrodsburg, KY, he was the son of the late Charles Blake Houp and the late Linda (Grubbs) Houp Hasan-Hamad. Aaron grew up in Harrodsburg, KY, and moved to New Albany, IN, then later moving to Georgia with his mother, stepfather and sister. He resided in Georgia with wife, son, sister, brother-in-law and nephews at the time of his death. Survivors include: one son: Austin Blake Houp; his wife, Julie Marie Houp; one sister: Ariel Paige Houp; and four nephews: Gabriel, Lucas, Alexander, and Nikolas Silva; as well as a step-father: Mohammad Hasan-Hamad. A Memorial Service will be 2 PM, Sunday, Sept. 19, 2021, at the Ransdell Funeral Chapel, Harrodsburg, KY. Visitation will be 1 PM, Sunday, Ransdell’s. Expressions of sympathy may be sent to the family at www.ransdellfuneralchapel.com.